Pine-Sol® with a pleasant hint of cherry

The last time I weighed 125 lbs, the wind was rushing through my hair as I ran the 120 yd high hurdles for my high school track team. I wasn't the best hurdler out there but did make it to State only to fall over the third hurdle in the finals.

I now weigh 125 lbs and wind does not rush through my hair; it blows the hair right off my head. Any sort of confrontation with a hurdle these days would result in complete victory for the inanimate object (I know, I know; as a black belt, I've taught many students to walk away from confrontation but hurdles don't hit back!).

So, I've started an appetite stimulant called megestrol or megace which tastes like ... you guessed it ... Pine-Sol® with a pleasant hint of cherry. You'd think that by the taste, it would have an opposite effect on the appetite but we'll know in a couple of days.

Many of you know my oncologist recommended that we talk to the surgical oncologist about the possibility of surgery even though the CT scan showed no change in the size of the tumor. We met with the surgeon and he didn't say "No; the tumor is unresectable." Resectable just means removable though I'm unsure why it's used instead of remove or removable. Maybe it's a doctor thing. Instead, the surgeon recommended something called an endoscopic ultrasound or EUS. It's an outpatient procedure that I've had twice already; this time, it will provide the surgeon with more information before he decides whether the tumor can be removed or not. (See? Isn't that clearer than 'tumor can be resected or not.'?).

So, on Monday, August 26 at 6am, I'll be at Medical Center Plano for the EUS procedure and expect to be home before noon. Once the anesthesia wears off, I should be good to go. Which is a good thing because on Sunday, September 1 at 10:30am, I'll be preaching at my home church. We'll take a biblical look at the Art of Bouncing Back which has to do with being resilient in times of trial - a topic that resonates with me.

"Without suffering, how can one know Joy?" This was a common argument I found during my study on Joy in March. It's a dualist thought like day/night, light/darkness, good/bad. But is it true? Instead of being two sides of the same coin, I think suffering (trial) and Joy are two totally different coins altogether. The Joy coin is that old JFK 50¢ piece or that silver dollar (the big ones, not the Susan B or Sacajawea ones) that you've kept around because they're a little unusual, can't be used in a vending machine and was probably given to you by your Dad or Grandpa. It sort of hangs around in your pocket and when you pull out the change to pay for something, it's the last one to go. Suffering is more like that proverbial bad penny that you found (or found you). It gets placed in the same pocket, jingles around with Joy for awhile but you can't wait to get rid of it. Sometimes it goes away, sometimes it doesn't. The funny thing, though, is that when you put the bad penny on the 50¢ piece, you still see the Joy. Reverse it and all you see is Joy. Can one know Joy without suffering? Yes, I believe so. But even in the midst of trial, Joy can make it's presence known. It's always been there; I just have to take it out, focus and remember. And the things that are bad in my life are brought into sharp relief compared to the One whom Joy is. The bad stuff is still there but so is He.

In the Palm of His Hands,
Rod
Posted by Rod at 5:55 AM No comments:

Gail and I met with our surgical oncologist this morning to get his opinion about possible surgery. After reviewing the CT scans, he came back with a "fuzzy maybe". The "fuzzy" part comes from the latest CT scan; the tumor covering the vein is fuzzy but the artery looks clear. This is good news - if the tumor grows over the artery then surgery is not an option.

The surgeon actually needs a more information so I'll be scheduled for an endoscopic ultrasound (EUS) with my G/I doctor which is the procedure used to first diagnose the tumor. The EUS will tell what comprises the mass; tumor, dead cells, inflammation and/or scar tissue. If the mass around the vein is dead cells then surgery looks more viable. Reading back what I've written, there's a certain banality throughout so it's time for a picture: 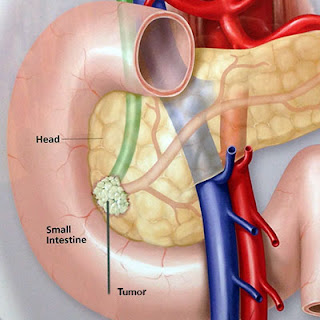 I snagged this from a larger poster the surgeons office while we were waiting. My tumor actually covers part of the blue thing (vein) but it's the red thing (artery) that we have to watch. They can reconstruct the vein but not the artery. The tumor is also putting pressure on the ducts (pale green thing and the light red thing) which caused the jaundice. They put a metal stent in the pale green thing so that the bile can get to where it needs to get to.

So, for now, I'm back on my chemo regimen (pills and infusion), will be scheduled for the EUS, will meet with oncologist on Monday for a normal follow-up and then a follow-up with surgical oncologist in a couple of weeks which should be after the EUS. All of this seems a little chaotic but I'd much rather be doing something then just taking chemo for the next six weeks. Plus, my deductibles are all met so that's nice.

I'll let you know when the EUS is scheduled. Erin Bradley reminded me of the older, mature Peter writing to various churches:

"In this you rejoice, though now for a little while, if necessary, you have been grieved by various trials, so that the tested genuineness of your faith—more precious than gold that perishes though it is tested by fire—may be found to result in praise and glory and honor at the revelation of Jesus Christ."

Praise and glory and honor ... it doesn't get much better. 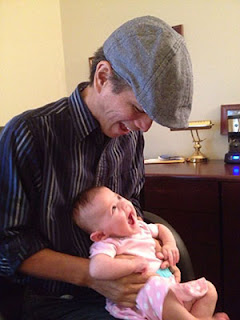 In the Palm of His Hand,
Rod Bayron
Posted by Rod at 11:14 PM No comments:

With Depth and Meaning

It's a simple phrase that impacts my heart because, for us, prayer is not an assortment of chosen words or expressions nor simple repetition of rote forms; it is the cry of the heart. People I've never met are praying ... family and friends are praying ... a deaf church in Plano ... a softball team I played on a few years ago ... former students and old classmates ... it's humbling, inspiring and encouraging. There is gravitas in the prayers of those who take time out of the busyness of the day and intercede with hands held tightly on well worn knees.

Here's one of my favorite stories:

A friend and coworker (recently diagnosed with MS) sent a text intended for Gail but ended up on some strange guy's phone. She explained the mix-up and, it turns out, he said he'd pray for both her and me. She mentioned that we work for a missions organization and he asked which one, since he was going on a mission trip soon. She told him about e3 Partners and ... you've already figured it out, right? The trip he's going on was an e3 expedition to Sudan.

Even though my oncologist didn't recommend surgery at this time, he encouraged us to talk to my surgical oncologist and get his opinion. All my CT scans are on CDs and we have an 8:30am appointment tomorrow morning. Wisdom and discernment are needed but I'm praying for simple truth. Simple, so I can understand it and Truth because it builds hope.

One burden of my circumstance is when I'm not able to hold my grandkids; my immune system is weakened so if they just had their shots or sniffles decidedly non-clear mucus back up ... we just can't afford to chance it. Which reminds me ...

Many of you asked about little Eva Marie and she's continuing to grow normally. Emotionally, weight, height, motor skills - all within norms. She has an unusual pinky, however; both father and brother seemed to be uncontrollably wrapped around it for brief periods of time. The plan remains the same - surgery in March or April 2014 to deal with her condition.

... to our e3 Creative department that got me a couple of great hats and started the flood → my son Ryan who gave me a couple of his hats → the CA Bayrons that sent me Hawaii gear from the last ho'olaule'a → Keith who took the time in his day to turn my long grass into short grass → my CO brother who sent me an awesome Dragon Cane; watch the video then send any unused palettes my way; I need the exercise!

In the Palm of His Hand,
Rod Bayron
Posted by Rod at 6:57 AM No comments: